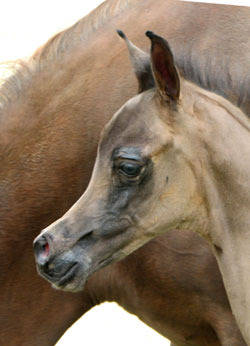 We have had a really great summer here in Scottsdale, although it has been another hot year the temperatures do not seem to be anywhere near the record breaking year we had in 2007. Come summer time we are always looking for a reason to get out of town and into some cooler temperatures. In our travels we always enjoy visiting other breeders to see their new foals and as always find some hidden treasures. We would like to share with you a few of the outstanding horses we have had the pleasure of seeing this summer, most are available for purchase.

We had the extreme pleasure of seeing this incredibly gorgeous weanling colt (pictured right) sired by Georgio AF and out of a very beautiful Magnum Psyche daughter. This is truly a colt with global appeal, not only should he be a top contender for Scottsdale but what a colt for the Vegas and International shows.

One of our favorite farms to visit is Butler Farms in White Oak North Carolina. Not only is the farm a beautiful place but the Butler and the Carson families are a great group of people who truly love their horses. Ted, Brandy and the entire staff at Butler Farms always do an incredible job presenting a great group of horses. Below is a few of David's favorites for you to enjoy.

One of our all time favorite horses is *Padron, we will always remember what an incredible impact this stallion has made on the Arabian breed through his outstanding daughters and of course through his legendary son Padrons Psyche and his world renowned grandson Magnum Psyche (pictured below). We are the proud owners of two Magnum Psyche daughters and two Psyche daughters including Magnums full sister Magna Psyche who has been an incredible broodmare for us. So you can imagine how excited we were when we saw Soverignn a gorgeous dark chestnut stallion who is a full brother to Magnum and Magna Psyche. Soverignn is a 2001 stallion with a beautiful face, huge black eyes and incredible movement. He is available for purchase and would also make a great show horse. 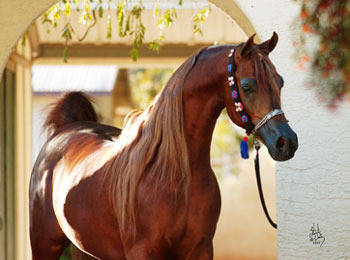 We had the pleasure of visiting a number of outstanding farms in the last few months including Mike Neal Arabian Centre, Freeland Farm, Butler Farms, Cedarbrook Arabians, Hawk's Flight Farm, Gemini Ranch, Webster Arabians, and has an incredible list of horses available for anyone looking to start a breeding program, enhance their current program or looking for a fantastic show horse.

We are extremely excited to announce the addition of two outstanding new mares to our breeding program, F Cogancs Fantasy who is our foundation mare BB Flamingo Rose's fifth foal and the dam of SWF Valencia (pictured below) who we sold to Al Shaqab Stud in 2006. We are so thrilled that Fantasy will be joining us this fall here in Scottsdale where she will live out the rest of her life with her mother and two sisters. Fantasy will be bred to WH Justice and Marque in 2009. 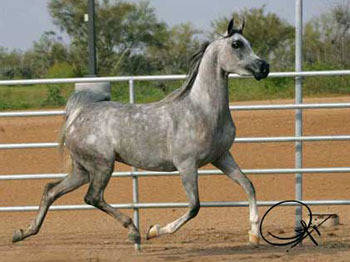 Bint Hadiyyah sired by El Hadiyyah and out of the Makhsous daughter Bint Hebet Allah is our second addition. Hadiyyah is an exquisite straight Egyptian mare with an amazing pedigree. We look forward to breeding Hadiyyah in 2009 to a Mishaal HP. Breeding season is finally behind us, this was probably one of our most difficult season ever, mares not cycling correctly and not wanting to ovulate. We made it through and we are very excited about next years foal crop. Below is what we are expecting in 2009. A few of the foals are available in utero.

With much excitement we are proud to say that this years foal crop is the best we have ever had. With 3 fillies and 2 colts we could not be more proud and look forward to presenting them to you in the fall for the 2009 Scottsdale season. Hope you are having a great summer, Stonewall Farm

Breeding & foaling season is upon us so it has been quite busy here at Stonewall Farm. We are so thrilled that our beloved mare Magna Psyche foaled an amazing filly by Selket Marque yesterday. This exquiste foal is every breeders dream, and expecially for being the first first foal born by our colt Selket Marque we could not be more pleased. Photos coming soon.

2 days before Magna foaled we also had another stunning filly by the super star Om El Shahmaan and out of our beautiful Padrons Psyche daugther Natalia Bey. This filly is so extreme and refined and her first day outside was so animated for a new-born. This filly is going to be a star. 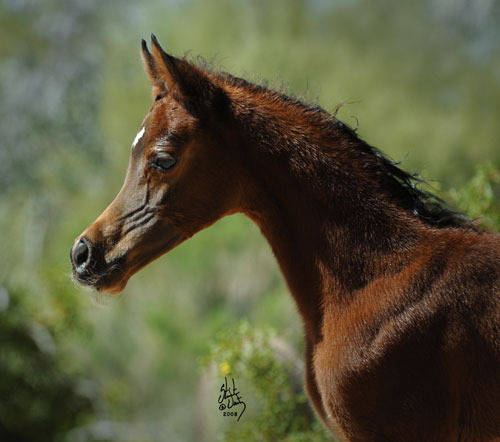 We had another amazing Scottsdale show. It is always such a busy time of the year but always so much fun as we get to meet many new people from around the world. This year we had the pleasure of being contacted by Urszula Leczycka from Poland about her upcoming trip to Scottsdale and if we could show them around town. Scott helped them plan a day trip to see the Grand Canyon while David took them all around town to see horses. They acquired 3 new horses to take back to Poland and also brought a package of 20 breedings to our stallion Selket Marque. They were so impressed with him and his quality, and we can not be happier that our young colt will be used in the great country of Poland by this amazing group of breeders. 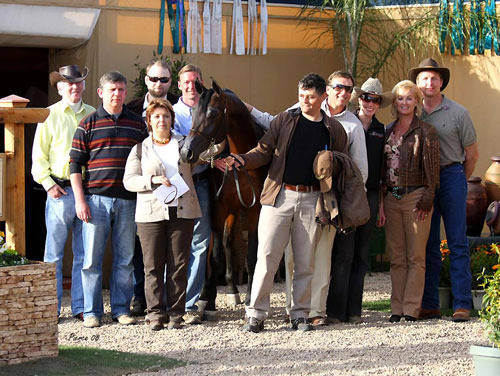 Our new friends from Poland, with Andy Sellman and Randy & Laura Brodzik

Recently we were in Saudi Arabia for the First Annual Al Khalediah Arabian Horse Festival which was held in Riyadh, Kingdom of Saudi Arabia on the 17 & 18th of January 2008. Some of the most spectacular horses in the world were in attendance. The show organizers did a fantastic job with the show and we were very grateful for an invitation to visit. 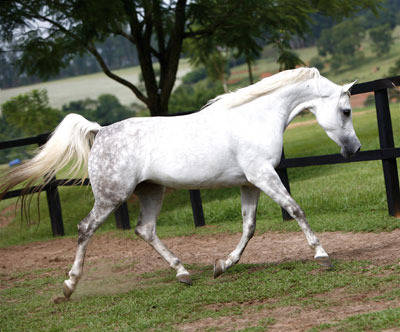 Congratulations to HH Sheikh Ammar bin Humaid Al Nuaimi, Crown Prince of Ajman, & owner of Ajman Stud in the United Arab Emirates on the recent win for Chammur, a daughter of Don El Chall. She was just named the Ajman National Champion Mare and we could not be happier for him. Scott traveled to Brazil last year in search of the very best for Sh. Ammar and happy with the results at her first show in the UAE.

Wow another year has come and gone. There are so many blessings to reflect on in the previous year, that is hard to know where to begin. We have had our most successful year in the Arabian horse business and with arabhorse.com in 2007. It has been a year that we have worked very hard, traveled the world and have enjoyed ourselves immensely. 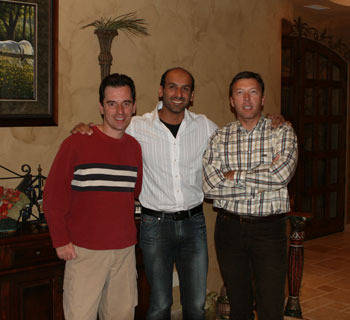 We have met some amazing people in 2007. Our new friends Mohammed Altawheedi & Abdelaziz Almarazeeq from the now famous Dubai Arabian Stud has been a very special friendship we have developed this year and we will remember it fondly. These are 2 of the kindness most generous people you will meet in the Arabian horse industry. Their hospitality in Dubai this past year was second to none and we have appreciated our new friendship with them and helping them realize their dreams in the Arabian world. David was able to travel with Abdelaziz right after Christmas to assist them in their further plans to find the best horses in the World. We were happy to show them around Scottsdale and California and help them find some new horses for the Dubai Stud Program. 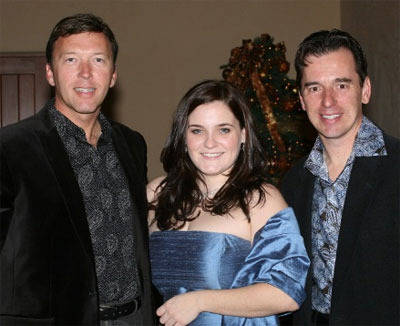 David, Cat and Scott at the AHBA New Years Party

The New Years Eve farm tours and party was a HUGE success. We were the first tour of the weekend along with Amurath Arabians and had nearly 200 people at our farm over the course of 5 hours. We had hoped for a good turn-out but in no way were prepared for the overwhelming response we had. The crowds were mostly new people that showed an interest in the Arabian horse. Scott and David Boggs were on Good Morning Arizona to promote the event and we had extensive print and Newspaper coverage in the valley. All of it bringing well over 1,000 new people out to see the Arabian horse over a 4 day weekend. We did not make all the open houses, but the ones we were at had easily 200 - 300 people at them. We could not be happier for the chance to expose the Wonderful Arabian horse to so many new people. Pictures and story soon to follow.

We wish everyone a very happy and blessed New year.
We hope all your dreams will come true in 2008.