What an incredible summer we have had here in Scottsdale. This past June was the most mild summer the valley has experienced since 1913. As we now move into August and the monsoon season we are looking forward to the fall and much cooler temperatures.

During the summer months we always try and travel as much as we can simply to escape the summer heat.  Scott spent time in the south of France attending the Menton show and the weekend in Monte Carlo. The Menton show is one of Scotts's favorite shows. While Scott was traveling in the south of France I got to travel to the pacific northwest and visit some of our clients and friends. My first stop was in Denver, where I spent the weekend with the very talented staff at Colorado State University. The doctors at CSU are amazing, they have done a wonderful job for us and our friends from the Dubai Arabian Stud. I also got to visit Joeann Wilms and have a look at her absolutely amazing Marque colt "Exclusive WA" out of her Magnum Psyche daughter Psylver Psyche VF. Next it was off to Portland where Stuart Sanders showed me around town. We had a great time looking at some pretty cool horses from Portland to Washington. I also got to see a Marque colt owned and bred by Mary Alexander of Windy City Farm. Again another super star, who will be making his way to Scottsdale 2010. After Portland my next stop was Salt Lake City, this was my first time to SLC and really enjoyed myself, what a great little city! I got to visit two farms that I have been wanting to see for a while. I have always been a fan of Muscat and loved Nariadni. It was great to see the breeding program of the Taylor's and all the history behind their program. Travis Hanson presented an outstanding group of young horses to me. It was great to see Travis and his family. 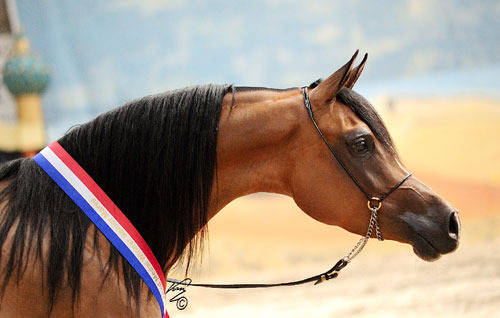 We are very happy that the mares have all passed their pregnancy exams and are still happily in foal. For 2010 we look forward to:

We have been very busy working on the farm, building new paddocks, barns and the lanscaping never seems to be completed. We arealready preparing for New Years's Farm Tours and the Scottsdale season. We hope you visit us soon.

The past month has been a great time for us at Stonewall Farm. We had our first three foals of the season born already and still have five more on the way! Our first was Jumeirah Rose (pictured below- bottom), a grey filly sired by the 2005 World Champion Junior Colt MA Shadow El Sher and out of our gorgeous daughter of BB Flamingo Rose, Desert Rose. Our second foal was Marianna SWF (pictured below- top), a bay filly sired by our colt Marque and out of one of the most beautiful daughters of Ultimate Star, Focus Starlet. Then came a stunning bay colt, also sired by Marque, out of Magna Psyche who is Magnum Psyche's full sister. We hope to have photos of him soon.

We have also been traveling! Our first stop, Dubai, has truly become one of our favorite places to visit. Dubai is a gorgeous city with endless shopping, dining and plenty of sightseeing! Our friend Kim Jarvis and her daughter Brooke Marie traveled with us and what a pleasure they were; we had so much fun! However our visit was not simply for sightseeing. We also attended the Dubai International Championships, the richest Arabian horse show in the world. As we have come to expect, the event was nothing short of spectacular. The quality of horses seems to improve each year. We were pleased that Desert Rose's filly Shamah Al Shaqab won the yearling division; she looked amazing. Michael Byatt did a fantastic job presenting her. Our congratulations go out to Michael and Al Shaqab Stud on this amazing filly who has a wonderful future ahead of her. We also congratulate our friends and clients on a very successful show season in the Middle East. It is a great pleasure to see the horses we have represented go on to win in show rings around the globe. 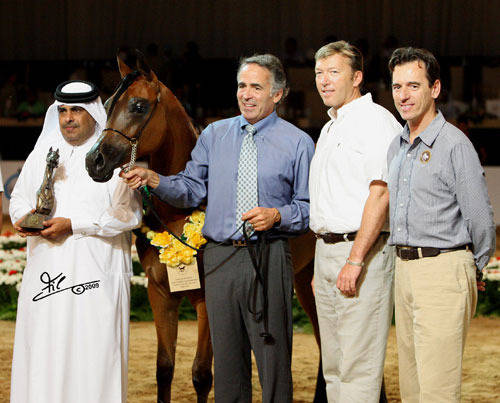 After Dubai it was off to Egypt, where our amazing adventure continued. Our friends and clients Tarek and his brother Ahmed Soliman were gracious hosts. We could never want for anything as guests of these great guys. Egypt is one of our favorite places to take friends who have never been. From simply driving down the road (for those of you who have been there you know what we are talking about!), to visiting the many incredible tourist destinations, and of course we love Egyptian food!

We spent a full afternoon at El Farida Stud previewing this year’s foals. We also saw many of the mares we assisted El Farida acquire for their breeding program and their resulting offspring. We are so pleased and proud of El Farida’s outstanding collection of Arabians and the foals these mares and stallions are producing. Congratulations guys!

With two fillies showing, we’re preparing for the AHBA World Cup - Las Vegas Show coming up in a few weeks. Marlana SWF will be presented in the Futurity Auction Class by our good friend Ron Armstrong and Nadina SWF will be show in the Senior Yearling Fillies class by our friend and trainer Jeff Schall. The Vegas show has become a show of major importance for breeders in the USA and we look forward to this show every year. Stonewall Farm will have a booth at the Vegas show and we hope you stop by and say hello! 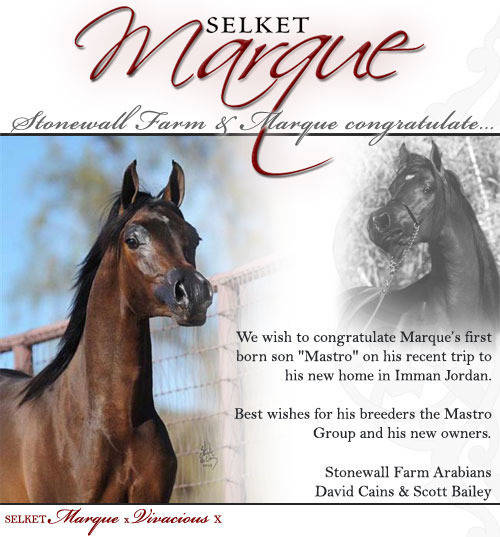 Mastro Al Jamal" is now in partnership with Jamal Kahok and is at Jamal Kahok Stables in Amman Jordan.

He will be presented at the Jordanian Nationals and then on to the Middle Eastern Championships! 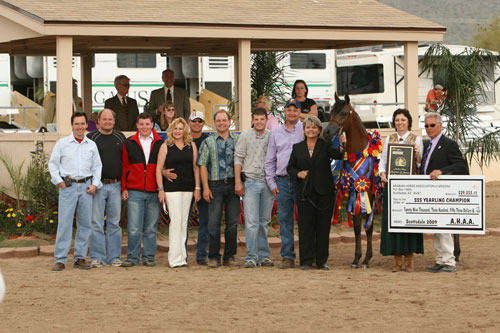 We were very pleased that Dubai Stud won unanimously with D Marc the Scottsdale Signature Yearling Colts class, one of the most competitive and largest classes each year in Scottsdale.

D Marc is by QR Marc and was successfully marketed by Stonewall Farm to Dubai stud at just a few weeks old. Congratulations to the breeder Rohara Arabians for sharing your treasure with us.

WOW, how time fly's! We had a very exciting summer , fall, winter and here we are in a new year with so many wonderful things to celebrate and share with our friends.

We were very honored to have been interviewed recently by "The National" a very prominent newspaper in the United Arab Emirates.

"Thank you" to Jeffery Todd for including us and for your excellent story on investing in Arabian horses.

The influence of the straight Egyptian stallion crossed on non-straight mares has produced some of the worlds most famous and sought after stallions including Ali Jamaal, sired by Ruminaja Ali
and out of Heritage Memory, Gazal Al Shaqab, sired by Anaza El Farid and out of Kajora, and of course we couldn't forget El Shaklan, sired by Shaker El Masri and out of world renowned mare Estopa. With that in mind Stonewall Farm is very pleased to offer two phenomenal new stallions for the 2009 breeding season. Both stallions are the epitome of true Arabian type and the most classic of pedigree. Ansata Nile Echo sired by the world famous Ansata Hejazi and out of one of the
most beautiful mares the world has know Ansata White Nile. Equally impressive is Turki Al Rayyan bred by the famous Al Rayyan Farm in Qatar and now owned by our friends at Al Khaled Farm. We are thrilled to offer these two amazing stallions to the our friends and fellow breeders here in the USA. Ten outside breedings will be offered on each stallion for the 2009 breeding season. Both stallions will be available by frozen semen only.

Stonewall Farm's own stallion Marque has been a busy young man, he will be the proud farther of foals born in Poland, Jordan, Italy and of course here in the United States. We are very excited of Marque's first foal crop born in 2008 and look forward to presenting them in Scottsdale and Vegas. After recovering from a life threatening injury Marque will be making his first public appearance in over a year, he will be presented in Scottsdale at the Scottsdale Signature Auction, Wednesday evening February 18th. Just wait till you see how this guy has grown up, we couldn't be more proud.

We would like to "Thank & Congratulate" our friends and clients on the recent sales: 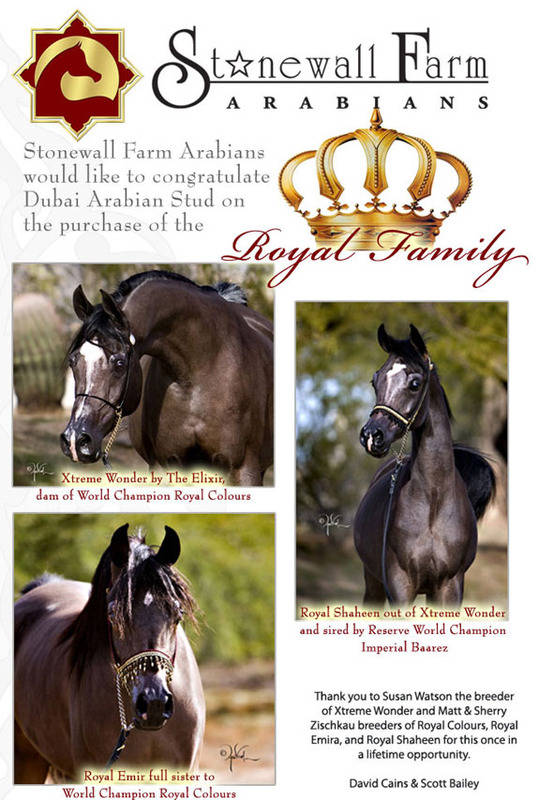 Mr Mohammed Altawhidi & Mr. Abdealaziz Al Marazeeq of Dubai Arabian Stud on purchase of the "Royal Family", Xtreme Wonder, dam of World Champion Colt Royal Colours , Royal Emira, the full sister to Royal Colours and Royal Shahneen a very special colt out of Xtreme Wonder and sired by Reserve World Champion Stallion Imperial Baarez. We are so proud to have this wonderful collection here in Scottsdale.

Dubai Arabian Stud on the purchase of a truly special young colt sired by the incredible Gazal Al Shaqab. More details to follow!

We are ready and anxiously waiting our foals for the 2009 season, we look forward to sharing them with you. We have several young foals as well as young show and breeding mares available on our sale list. We will also have a few embryo's available for the 2009 breeding season, contact us for further information on our create a foal program using one of the incredible mares of Stonewall Farm.

We look forward to your visit to Scottsdale and seeing our old friends and making new ones!